This was my first 50k and second trail race.  I love the Superior Hiking Trail--I've backpacked most of it and last year I ran the 25k version of this race and it was the funnest race I've run.  My only goals for this one were to finish and enjoy it.

Lisa, Steven and I drove up from Mankato Friday afternoon.  We stopped at the Black Bear Casino for a buffet supper.  We stayed at the ski resort in Lutsen and could see the finish line from our balcony. 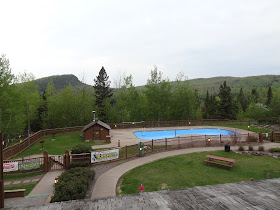 I've never cared much about race swag, but this one had the coolest numbers.  Notice how it matches the view of Moose Mountain from our balcony. 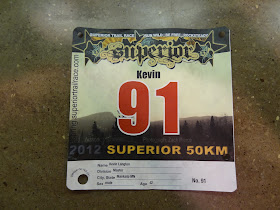 Steven was asleep on the couch in our room when Lisa and I headed to the start line.  There we ran into our friend Tom, who has run many long distance trail races and is a super-nice guy. We took pilates with Tom last winter, although the class was at 5:30 am and I only showed up three times.  Soon we were off and running, pavement turning to gravel turning to single track. Tom and I chatted about our favorite places to train, Seven Mile Creek, Indian Lake, Rasmussen Woods, and a local ski hill that shall not be named because their trails are for mountain biking only.  Somewhere on Mystery Mountain we separated in a traffic jam--I knew I was being stupid running ahead uphill and I also knew, or assumed, that I would see Tom again before the finish. 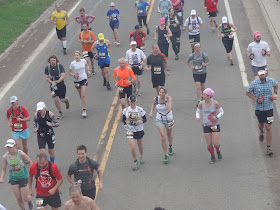 The run down Mystery Mountain and up Moose Mountain felt good of course, but it was early.  I love the ridgetop running of Moose Mountain.  Along this section I ran between a gentleman from Kenya and a friend of his.  They were with a larger group of runners who were raising money to build a school in Kenya. I try to stay in the moment when trail running, but descending Moose Mountain I couldn't help thinking how that climb would feel on the way back.
I was shocked going downhill into the first aid station at Oberg Mountain, shocked that I was already there. I didn't stay long.  I ate part of a banana and traded out one of my water bottles and kept moving. 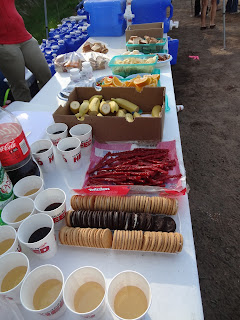 My goals for fuel were to drink a bottle (10 oz., Amphipod brand) of coconut water from my belt, eat a gu package and a salt caplet at the top of every hour, and to drink or eat at aid stations and whenever I felt like it, but the hourly check-ins were so I wouldn't fall behind on fuel.  My Amphipod belt is hardly noticeable when I'm wearing it and it can carry four bottles and it has a pouch I loaded with gu and salt caplets.

My mind wandered with the scenery through the next section.  Close to the end of this piece the leaders began to come by in the opposite direction--that's one of the fun things about an out and back course.  They looked fresher than I felt, and we almost always exchanged encouragement.  I came into the second aid station and didn't see Lisa or Steven--maybe Steven was fixing his hair. One of the awesome volunteers helped me switch out water and I continued on.  This next section up Carlton Peak wore on my legs some. While I enjoyed the views from the peak and took a short breather there too, the up and down of this piece seemed to stay with me awhile. I cruised through the next aid station feeling confident, but Carlton Peak was still with me. That piece of the run from Briton Peak to Oberg Mountain, flat and only 5.5 miles, seemed the longest and slowest.  Perhaps it was the heat. Or the miles. I wanted to take my clothes off.  I wanted to lay down in the grass and take a nap. 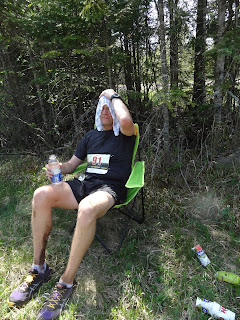 When I hit the station at Oberg, I certainly wasn't as hurried as I had been at the others. I asked to drag a lawn chair into the shade and I asked Lisa to tell me when I had been there five minutes.  I never considered dropping out, but I needed this rest.  Tom had warned me that the run would involve some emotional ups and downs, and I definitely felt down.

My hands were puffy and my legs ached, but I wasn't cramping yet.  My big toes were complaining a bit about the downhills.  When Lisa said I had been in the chair five minutes, there was no hesitation.  I hit the bathroom and was actually excited to start this last piece of the run.  I knew though that the terrain here would be the most demanding. Maybe that's why I was excited. Maybe I was nervous.

For me there was nothing fast about this section.  It also involved a lot of walking on the uphills.  But climbing Moose Mountain had a strange thrill to it. I kept telling myself to simply put one feet in front of the other.  Sounds easy and simple now.  I focused on a meditation involving breathing and steps--I find trail running to be one of the most meditative in-the-moment places of my life.  I could not think about the finish line.  I could not even think about the top of Moose Mountain.  I could only live in this breath, in this step.  It might sound cheesy, but it got me to the top of Moose Mountain, and it got me to the top of Mystery Mountain too.  This section felt lonelier than the earlier parts.  Even though there were some 25k runners on the course too, it felt more isolated, in a good way. 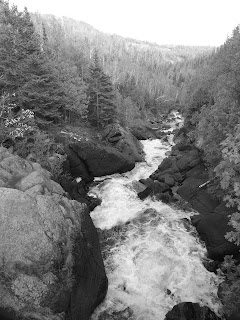 Landmarks such as the group campsite atop Mystery Mountain and the river crossing were encouraging.  My spirits had been better for this last section.  I'm not saying I felt fast--in fact, I even walked a few steps of the gravel, almost within sight of the ski resort.  But I sure felt better.  And happy.  As I passed one of the 25k runners on the pavement section, I reminded him that we needed to enjoy this, that we deserved to enjoy it.  I was probably saying this more to myself than to my fellow runner.  A few seconds later I looked back and saw Tom's orange shirt.  I was so excited to see him and we yelled encouragement to each other. Next thing I knew I was circling the pool and grabbing someone's shoulder while the computer chip was taken off my shoe. I had been on the course for 6 hours, 48 minutes and 9 seconds.  I finished and I had enjoyed the run. 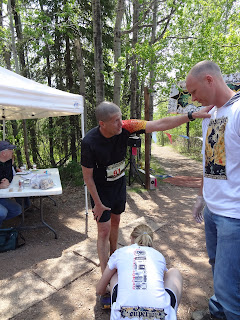 So here is what I learned, or at least what I was reminded of: I love trail running, the community, the terrain, the challenges, all of it. While I had an absolute blast at this race, it was the day to day training that I enjoyed most.  Lately, running has felt more a part of my life than any time since high school, and that was so long ago it doesn't count as memory. Running helped me get clean and sober almost six years ago. Running helped me quit smoking almost eight months ago. It also provides an outlet for spiritual growth and camaraderie in my life, and I'm grateful I'm still able to do it.

My shoes were Asics Fuji Racers, and while I wish they were offered in more colors than purple, they stayed with me throughout the race.

My fueling system worked well, although I should have eaten more at the aid stations.  I think I only ate bananas.  My hydration belt works great.

I don't know how I would have trained any differently.  One can always say more of this or that, but I was content with my training.

Everything about this race is great.  It's well-organized.  It seems to have good karma.  The volunteers still rock. The race number and shirt are both amazing.  Also, I had so much fun I signed up for the Afton Trail Run, the 25k version. 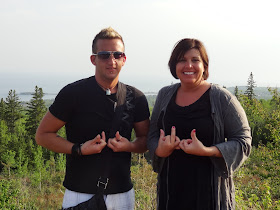 My crew is awesome.  They look so gangster here I would be scared to mess with them.  I'm grateful I had their company for this experience.